In 2014, the inaugural cohort of students in the Wake Forest University Master of Arts in Sustainability (MAS) program sat for their first class. Now, just eight years later, the program’s 100th student is enrolled and slated to graduate this fall.

MAS, which was originally spearheaded by CEES members, has already been a smashing success, and the program is on an upward trajectory. It is supported by a trio of accomplished and efficient administrators: Stan Meiburg (WFU ‘75), former acting deputy administrator of the U.S. Environmental Protection Agency, directs the program, with support from Assistant Director Ashley Wilcox and Director of Outreach Jon Clift.

Steered by Meiburg, Wilcox, and Clift, MAS has “found our place as a program that not only conveys knowledge, but helps students who come into the program looking for discernment about their place in the sustainability movement,” explains Meiburg. Eight years ago, the definition of sustainability was nebulous, and so prospective students weren’t sure what to expect from a master’s program in the field. But, says Meiburg, the vision of the program at its inception was ahead of its time: “There has been wider social realization, not just in the environmental sector, that has helped raise the visibility of sustainability issues over the past decade.”

Today’s MAS program helps students find their place in the movement, by giving them both the space and the tools to discover their place and develop their talents. As part of the program, MAS students have completed internships at Walmart, Wrangler, the Yadkin Riverkeeper, Hanes, and many other companies and organizations. MAS alumni have gone on to work for entities such as the London Stock Exchange, Burt’s Bees, the Peruvian government, the New Jersey Department of Environmental Protection, and even the FBI. “For some, this is a major inflection point in their lives, and they go on to do something totally different than what they intended to do,” Meiburg notes.

MAS is so transformative because it leverages one of the most impactful components of a Wake Forest education: collaboration. “The things that we do best are connections, whether it’s connecting students to each other, students to faculty, or knowledge and ideas to people,” emphasizes Wilcox. And this is reflected in the high percentage of prospective students who hear about MAS through word-of-mouth or direct recommendation from alumni. Once they apply, Wilcox and Clift give individualized attention to interested students, which is often what they need to take the leap and enroll in the program. Meiburg’s extensive network of environmental and sustainability professionals, built through his time at the EPA, doesn’t hurt in making those personal connections. “Have you heard of the game ‘Six Degrees of Separation from Kevin Bacon?’ We like to play six degrees of separation from Stan Meiburg,” quip Wilcox and Clift. 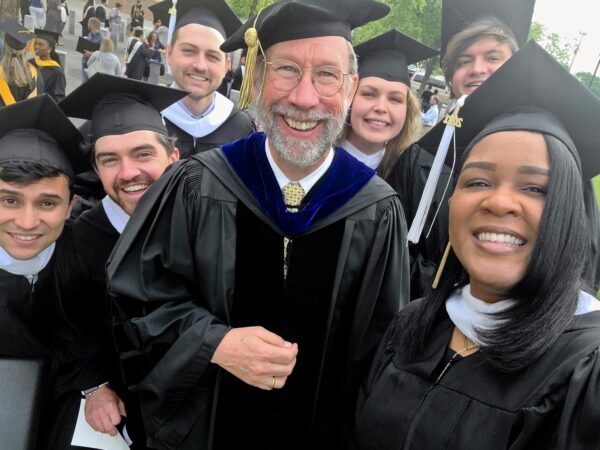 This formula is paying off. MAS has seen substantial increases in both applicants and enrolled students over the past few years, in part because corporate and business leadership has ramped up their commitments to tackle climate change and reduce their carbon footprints. “That’s a rapid change from 10 years ago,” notes Meiburg. The degree, which takes two academic semesters plus one summer internship, can now be completed entirely virtually, although there are also in-person elective options. The change to virtual instruction was planned even before the COVID-19 pandemic, but for Meiburg that experience, “gave me confidence that you could do an online program while not losing the contact between faculty and students, and among the students themselves, that is so special to a Wake Forest education.”

Above all, the MAS program operates with – and fosters in others –  the understanding that sustainability is for everyone. The majority of students who enroll are young professionals, but everyone from fifth-year undergraduate students to mid-career people looking to switch careers also flourish in the program. While many are from the US, MAS also attracts international students, with students and alumni from Peru, Brazil, Colombia, Denmark, China, Iceland, Senegal, and Sweden. And, it is open to people from all academic backgrounds, ranging from environmental microbiology to vocal performance. This immense range of life experiences exposes students to a breadth of perspectives that sets them up for future success. Put simply by Meiburg: “Sustainability is a broad lens, and all of these perspectives are valuable.”

With its unique combination of a world-class education, transformative hands-on experiences, and connections to a rapidly growing network of fellow sustainability professionals, it is clear that the Master of Arts program in Sustainability sets up Wake Forest students to change the world – and with nearly 100 alumni, it is just getting started.

Learn more about MAS and the other Wake Forest graduate programs in sustainability: http://graduate.cees.wfu.edu/