Since 2015, CEES researchers Max Messinger (’13), director of Wake Forest’s Unmanned Aerial Systems Lab, and Robbie Baldwin (’17), Biology graduate student, led by principal investigator and CEES Leopold Research Fellow, Jared Beaver (’08), have worked with local officials at Pilot Mountain to manage the population of white-tailed deer. Their work is now featured in “Pilot Mountain has a deer problem. Drones can help.” — a documentary collaboration with students from UNC Chapel Hill that aired on UNC-TV Public Media of North Carolina on April 4, 2019. 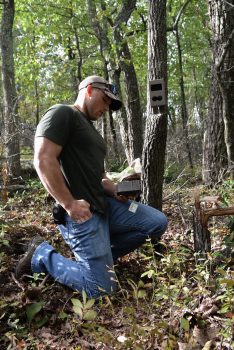 CEES Leopold Fellow in Biodiversity and Ecosystem Services, Jared Beaver (’08), analyzes the camera traps that were first used when the Pilot Mountain project began. Beaver is the principal investigator and project creator.

As the over-population of white-tailed deer continues to affect the landscape of Pilot Mountain State Park, CEES researchers – and their innovative technologies – are paving the way for new approaches to population tracking and land management.

A problem arises at places like Pilot Mountain State Park, where native flora has been depleted by over-grazing but population management strategies like hunting are not allowed. While the area typically supports 10-20 deer per square mile, current counts are up to as much as 80 per square mile. Gathering accurate population counts is a critical first step to determining land management strategies to restore a forest to its healthy equilibrium.

“Without a story like this being told, people may not be aware of how threatened our environment is and how important it is to try and keep the numbers of our indigenous species of plants and animals in balance,” said Beaver in his recent interview with local NPR affiliate 88.5 WFDD.

Beaver and Baldwin first began tracking the number of deer with camera traps that detected their motion. The first traps were placed in the field in March 2016 with a total of 22 camera sites — one per 100 acres. Traditional camera traps are a widely-accepted tool, used by local landowners and hunters on their own properties. Baldwin’s work over the past three years has taken traditional camera trapping further — incorporating statistical analysis with “N-mixture models” to revolutionize this tried and true method. 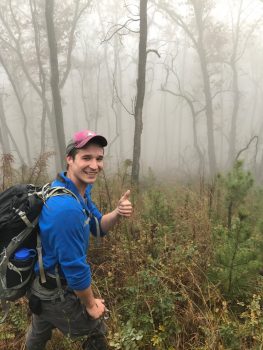 Robbie Baldwin (’17), has been with the Pilot Mountain Project since its inception, implementing a novel method of camera trapping data collection and analysis.

The team then began incorporating drone technology from the unmanned aerial systems lab in February 2018 at Pilot Mountain. They found that the estimates from the two camera trapping methods overlapped with those provided by the drones.

“This gives us really high confidence that using these assumptions [from N-mixture models] gives us a pretty accurate representation of the population of the area,” Baldwin said. “The big improvement with the drones is that we can collect a lot of data really accurately, really fast.”

The accuracy of the data collected by the drones has been tested and proven at up to 95%, according to Beaver.

Wake Forest researchers and park rangers continue to work together to incorporate this technology and find new, effective ways to manage the deer population. In the meantime, areas of Pilot Mountain State Park have been fenced in to create study plots — areas where inventories of plants, vegetation and wildlife can be kept free of grazing deer — to be used as points of comparison to areas heavily trafficked by deer.

The hope is that Pilot Mountain — a place once known as a home to rare wild flowers — can have its ecological balance restored.

“When you hear the Division of Parks and Recreation it is easy to focus on recreation,” said Park Superintendent, Matt Windsor in the UNC-TV documentary. “But the bottom line is that we need to understand what is going on in our parks and we have to be able to partner with area researchers to be able to do that.”