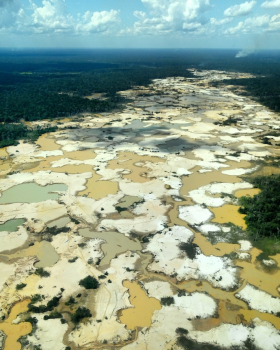 In August 2018, Wake Forest’s Centro de Innovación Cientifica Amazónica (CINCIA) published a study with the United States Agency for International Development (USAID) and the World Wildlife Fund (WWF), on illegal gold mining in Peru. The study found that deforestation from illegal mining has reached the highest it has ever been in 2017 in the Madre de Dios region of Peru’s Amazon Basin. From 1985 to 2017, gold mining, by both illegal and informal practices, has deforested 95,750 hectares of forest; one hectare is equivalent to 2.47 acres.

Illegal mining occurs when precious minerals, such as gold, are extracted without permits or licenses from the state that establish rules for proper mining practices. Dr. Miles Silman, Director of CEES and a professor of conservation biology, explained how laser-guided images from satellites to quantify both forest diversity and the breadth of destruction caused by gold mining to contribute to this study. The study applied the pioneering method of Dr. Greg Asner, from the Carnegie Institution for Science, who employed laser-based imagery to map the Peruvian Andes and Amazon.

Deforestation by Gold Mining Reaches its Peak in 2017

CINCIA’s research shows that in 2017 alone, nearly 10,000 hectares were deforested as a result of gold mining. Drones and laser-based imagery have greatly assisted in CINCIA’s ability to survey the land and see the effects of this deforestation.

“It is difficult to distinguish the origins of deforestation, but with this method we have been able to better sweep the information and we have found on average 21% more area than was normally considered” Dr. Silman said in a story reported by Mongabay Latin America.

CINCIA’s research found that 67.5% of forest loss, 64 586 hectares, occurred between 2009 and 2017. CINCIA particularly traced how construction of the Inter-Oceanic Highway, from 2006 to 2011, affected these trends. The Inter-Oceanic Highway connects Peru and Brazil, and deforestation skyrocketed when the highway brought a substantial number of miners to Madre de Dios. CINCIA also found that rates of forest clearing increased despite a dip in the price of gold for the United States.

This demonstrated that the main driver of deforestation in Peru is not international demand for gold, but instead the absence of effective local regulations.

Madre de Dios has multiple protected areas for its forest stock, yet illegal mining has concentrated in the “buffer zones,” or immediate surroundings, of said areas. CINCIA found that from 1985 to 2017, 31,000 hectares of forest were destroyed. Miners managed to enter the Tambopata National Reserve, by crossing the Malinowski River, though the damage was majorly contained by local authorities.

Aside from deforestation, another significant problem for Madre de Dios has been mercury contamination. Miners use suction pumps to find gold beneath the soil, leaving unclosed pools of water contaminated with mercury. CINCIA conducted an additional study to find how mercury pollution affected fish in nearby rivers diverted by mining.

Francisco Roman, CINCIA’s scientific director, and Claudia Vega, director of mercury research at CINCIA, explained the study’s alarming conclusion: highly unsafe levels of mercury were found in fish near mining areas. International standards determine that 0.5 mg/kg (half a milligram of mercury per kilogram in weight) is the safe limit for mercury in fish. CINCIA found that the mercury levels of carnivorous fish species from mining areas far exceed that limit, by almost double. 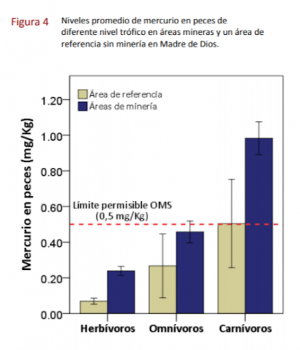 The fish species most affected were the carnivores that consumed bottom-eating fish. As smaller fish suck up mercury-laden sediment, the larger fish that eat them become contaminated. Herbivores and omnivores in mining areas had far lower mercury levels, yet locals prefer the carnivorous fish because they have more meat.

The dilemmas of forest conservation and public health have become interconnected. Dr. Vega concluded that Peru’s Ministry of Health should strive to understand the deleterious health effects that mercury, a toxic chemical, is having on the local populations of Madre de Dios. Luis Fernandez, executive director of CINCIA, was quoted in a Miami Herald article saying that individuals from rural indigenous communities in Madre de Dios have triple the mercury levels of non-native people living in Peru’s cities.

“You need to have a policy against mining that reflects the reality of what is happening,” Dr. Silman said in the Mongabay Latin America article.