Retiring Reynolds Professor of Physics talks about successes, the future, and his pride in being a Demon Deacon.

After four years as a student and 31 years as a Reynolds Professor of Physics, Richard Williams will officially retire in July of 2017. 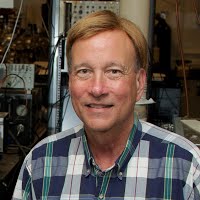 Williams, an international expert in scintillators and ultrafast laser spectroscopy, received the first Speas Award for distinguished work in physics, mentored the first Physics PhD graduate, and was the first endowed professor within the Physics Department. Williams also served as one of the four founding members of the Wake Forest Center for Energy, Environment, and Sustainability.

“Richard Williams is one of the engines of sustainability at Wake Forest. He was a leader in the group of us who came together to form what eventually became CEES, and a prime architect of building the center we have today,” Miles Silman, Director of the Center for Energy, Environment, and Sustainability said. “Richard is not only fiercely dedicated to pushing the boundaries of renewable energy research, but also using old-fashioned ingenuity to bring methods to scale, and his enthusiasm to bring people together.”

Looking back, Williams shares his perspective on establishing the Center, the Center’s accomplishments, and the future.

What initially attracted you to help establish the Wake Forest Center for Energy, Environment, and Sustainability? Why was this important to you?

Grand challenge, concern, excitement, and shared sentiment with friends all come to mind as describing my own reaction in the first few days after WFU Provost Jill Tiefenthaler kicked this adventure off with a call for white papers in 2008. The call was for what Wake Forest might do with a million-dollar new Center, leaving the purposes of the approximately five new centers proposed up to imagination at that point. The round number $1 million was well chosen for effect, at least in what it said to me. It seemed to underscore that the University was looking for ways its people could have noticeable effect on grand challenges.

To physical scientists, there was not much of a grander challenge, it seemed, than supplying the tremendous growing need– the widely misused adjective “exponential” is actually pretty accurate here– for energy by humanity without wrecking the planet that we ever more densely inhabit. It was even that rare oddity of a science and engineering topic that you could become passionate about.

I remember that Dave Carroll was waxing passionate with the rest of us while assembling the white paper response and came up with an opening sentence that somehow cast fossil fuel threats as the four horsemen of the apocalypse “driving up in their SUVs.” I remember it nine years later not only because the reviewers told us to nix that phrase but gave the go-ahead to write the proposal anyway, but also because Dave had captured perfectly my sentiment and I was sad to see that phrase go away.

Fast forward through other experiences in which the first proposal was turned down, and the second one very ably headed and re-shaped by Miles Silman and others brought CEES to where it is today.

What do you hope to see CEES accomplish in the next few years?

I’m pleased to say I think I got a good view of it just last week. I was asked to serve on the Ph.D. examination committee for Shiba Adhikari– now Dr. Adhikari, a student of Professor Abdou Lachgar in the Department of Chemistry. To use a term from my own research area, the research and his account of it was scintillating (translate as sparkling). What I mean is that this was work right at the current frontier of inventing materials with real effectiveness for using sunlight to split water into hydrogen and oxygen. Running with the big dogs of energy, if you will.

I was there for part of the early back story. At the time, there was no pre-existing project or detection setup for this kind of photocatalysis at Wake Forest. It took five years or so starting from scratch, but they made it work and now Wake Forest is fully at that table. I’m guessing that it would not have happened at this particular time at this University if there had not been the combination of conversations and interactions, a bit of CEES spending, and a lot of hard work by Dr. Lachgar’s group. But, it did work and I think that is one example of the working of CEES, close to the sandbox that I play in, under the big tent.

Tell me about your time at Wake Forest University. What memories stand out to you the most?

Too many. It would extend this piece needlessly.

How are you looking forward to spending your time in retirement?

I still have two graduate students with two years to go, and a postdoc and faculty colleagues in research. The students and postdoc and three continuing research grants are in the areas of nuclear radiation detection that came to occupy me and my group full time for the last number of years (another grand challenge– defense against terrorism and accidents). After, I hope to move the lab to a new location and keep the research going because it’s fun. 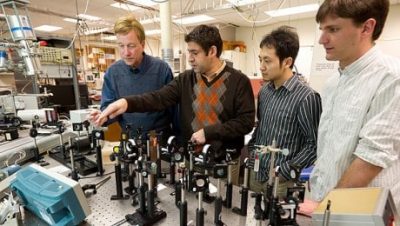 Additionally, I don’t plan to let another fall or spring go by without some time outdoors to observe the environment we are thinking so hard about. I got started this spring with checking every morning and evening on a pair of great blue heron nests located around 75 feet apart in the treetops around our small pond. At the Ph.D. hooding ceremony I was starting to ask Bob Browne and Bill Smith what they knew about the strange and sometimes seemingly cruel parenting methods of herons when we had to start marching.

“Working with Richard has shaped how I view sustainability in its broadest sense—it has been a great experience for me, and great for all of us at CEES and Wake Forest” Silman said.

Note: This interview has been edited for length and clarity.