“Many people say they have a professional calling. Mine is debate.”

Justin Green, assistant professor in the Department of Communications and Wake Debate coach, has been engaged in public debate for 28 years; for the past three years, Green has provided local high school and college students the opportunity to engage in competitive, academic debate on topical environmental issues.

On March 11, Green teamed up with the Piedmont Environmental Alliance (PEA) to host the annual Piedmont Environmental Debate Tournament at Wake Forest University. During this event, over 70 high school students from five Triad high schools debated whether municipalities should convert more wastewater for drinking purposes. To prepare students, PEA and Green worked with students to conduct research and hone their public speaking and argumentation skills.

“At the high school level, I feel that debating and speaking about these real-world environmental issues is very important. It forces them into questioning their environmental footprint and the social and economic costs associated with that,” Green said. 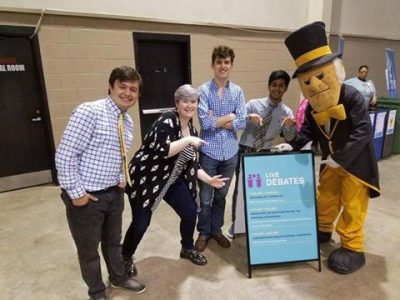 “These debates spurred classroom discussions on wastewater treatments and where we get our water from– all discussions that may not have happened in the classroom without the PEA Environmental Debate Tournament,” Green said.

The Wake Forest Debate Team, chaired by Green, engaged in public debates on the issues of fracking and water privatization during the PEA Earth Day Fair as well.

“The practice of speaking in front of large groups of people on a projecting microphone in front of complete strangers that ask very difficult questions is a great life skill practice to have,” Green said. “The goal is to promote better dialogue so that we can collectively make better decisions.

Judges are needed for next year’s Piedmont Environmental Debate Tournament. Those interested in making a difference in the lives of high school students are encouraged to contact Green, greenjm@wfu.edu, for more information and opportunities for involvement.