The Center for Energy, Environment and Sustainability has partnered with Pilot Mountain State Park to conduct a deer and large mammal population survey in effort to monitor the effects of white-tail deer populations on Piedmont ecosystems.

Former Wake Forest biology undergraduate student (’08) and soon-to-be Texas A&M University PhD, Jared Beaver, and biology major, Robbie Baldwin (’17), are leading the effort. Beaver and Baldwin have set up an extensive network of 22 camera traps around the park to capture images of animals in this multi-year study. 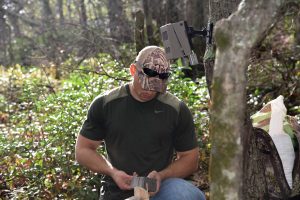 The team is making use of camera trap technology to capture images of passing animals. It is a quantitative technique that has relatively low labor costs, is non-invasive, and incurs minimal environmental disturbance.

“There is an endless supply of positives for camera surveys,” Beaver said. “It’s a very cost-effective tool once you have the cameras and the sites—you just need corn.”

The corn is used to attract deer to the camera sites around Pilot Mountain. Armed with volunteers, Beaver and his team are backpacking over 3,000 pounds of corn in 50-pound bags anywhere from 100 to 2,000 meters to camera trap sites around the park throughout October.

“It’s a great way to help science along, build community in the department, have fun, and see some beautiful, local forest,” Miles Silman, Director of the Center for Energy, Environment and Sustainability said.

The Pilot Mountain project came into inception in 2015, and the first camera were placed into the field starting in March 2016. Now, the team is into the second phase of this research includes using corn as bait to draw deer to the sites around the park. The baited portion of the camera survey began on Sept. 30 and will continue until Oct. 14.

Before Beaver began his research, Pilot Mountain State Park had never conducted a white-tail deer survey. The need for this survey stemmed from a historical abundance of native North Carolina plants present in the area that have since disappeared—which observation has indicated the carrying capacity for deer on Pilot Mountain has been exceeded.

As a result, white-tailed deer are having substantial and harmful ecological impacts on Pilot Mountain and the surrounding Piedmont area and are considered keystone herbivores in eastern forests.

So far over 1,600 photos have been collected by the non-baited portion of this research. By the end of the baited survey, Beaver and his team expect to have approximately 35,000 to 45,000 photos to analyze.

Before getting involved with the Pilot Mountain large mammal survey, Beaver worked with the National Park Service in the Great Smoky Mountains, assisting with elk restoration, feral hog management, and nuisance bear control.

Currently, Beaver’s work in pursuit of a doctoral degree in wildlife and fisheries sciences involves the study and assessment of white-tailed deer population ecology and habitat management at Joint Base San Antonio.