Last week, the North Carolina Power Dialog allowed students to participate in civil discourse through a different lens: their own. The US has made a climate commitment of 30% cuts in global warming pollution by 2030. Unfortunately, energy-related issues in the United States have been politicized to the point that young stakeholders often feel disempowered and forced to accept the status quo of political stalemate.

The mission of the national Power Dialog was to allow 10,000 students to engage in face-to-face dialog with state officials and energy experts in more than thirty states nationwide. Students and faculty for North Carolina’s dialog hailed from Wake Forest, Appalachian State University, Duke University, Guilford College, and NC A&T University.

The student participants of the Power Dialog were given the opportunity to speak up, for their opinions must be strongly considered when making critical decisions about the planet’s future. Wesley Skidmore, a sophomore at Wake Forest who is majoring in physics and mathematics, reflected on the experience: “The Power Dialog provided me with an excellent opportunity to engage in a complex discussion about North Carolina’s energy regulations, and gave me a chance to voice my qualms and opinions to representatives from the companies and agencies who will play a large part in determining North Carolina’s future plans for energy.”

The issue guide was informed by a series of in-depth interviews with key stakeholders in civil society, government, and the energy sector. For example, Gaude interviewed stakeholders from NC A&T University’s Center for Energy Technology and Duke University’s Nicholas Institute: “They believe the topic is critical, so anyone willing to engage is an ally.” The following perspectives emerged on how North Carolina could proceed in meeting the US climate commitment:

1. Stay the current course toward GHG reductions
2. Increase efficiency in our buildings and infrastructure
3. Increase the deployment of renewable energy technologies
4. Increase education and advocacy for greenhouse gas reduction

M.A. candidates acted either as moderators or scribes in each of three breakout sessions to discuss these themes. Scribes were challenged with the task of accurately capturing participant perspectives and stories in just a few words. For M.A. Sustainability candidates, who could have been considered “experts” in the discussion but served as neutral moderators, without adding personal commentary, was equally challenging.

While the dialog succeeded in giving students access to powerful stakeholders like the NC Department of Environmental Quality and the US EPA, it was at times difficult for students to embrace their own power and voice. In one breakout session, for example, the conversation was at times dominated by sparring between the state’s primary utility provider and another expert stakeholder. While the dialog’s intentional foray into civil discourse was applauded by several industry and governmental stakeholders, the instinct for some to engage in a more polemical debate was difficult to resist.

Once breakout sessions concluded, participants from all three groups rejoined for a collective debrief on action items. Increased education and advocacy were identified as emerging priorities for North Carolina, and staying the current course toward GHG reductions is simply not enough. “Different minded people were able to find common ground, which was a fantastic way to see how progress can occur,” concluded Gaude. Students of all ages should continue to develop confidence in their ability to communicate across difference, to view complex issues from multiple perspectives, and ultimately to discover viable solutions–for they have the greatest stake in the future of the planet.

View the North Carolina Power Dialog photos below on Flickr. 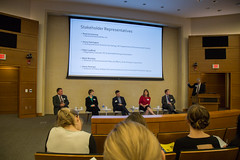