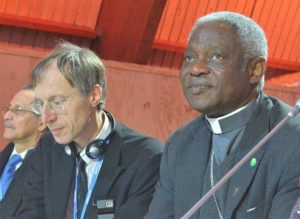 Justin Catanoso, director of journalism at Wake Forest University, led an exclusive Mongabay interview with Cardinal Peter Turkson. For 18 months, Turkson led the drafting of Pope Francis’s climate change encyclical, a document said to have helped shape the Paris Climate Agreement. In doing so, Laudato Si, On Care for Our Common Home makes an uncompromising appeal to save the earth from ruination by reducing the unabated and unsustainable consumption of natural resources.

The 180 page document came at a critical time. Published in June 2015, it aimed to pressure world leaders to take action on climate change — something they did in December at the United Nations climate summit in Paris.

Catanoso, whose reporting on climate change is supported by the Center for Energy, Environment and Sustainability, interviewed the Ghanaian Archbishop of the Cape Coast just three days after COP21 produced the historic Paris Agreement. He was blunt, candid, plain spoken, and even referred openly to the church’s pedophilia scandal several times. He made it clear that the Holy See — a delegation of just four individuals in Paris — left its mark on the final climate agreement. As did Pope Francis.