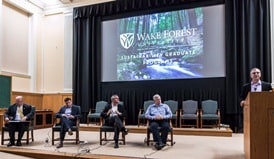 On talk shows and political fronts across the United States, the battle to be right about climate change — and possibly save Earth — is playing out. The panel discussion at Wake Forest on April 24 became a microcosm of that battle as the panelists disagreed about climate change policy in North Carolina.

Duke Energy was represented but claimed it cannot pursue clean energy on its own accord because of legislation.

“We are a regulated utility,” said Mark McIntire, Duke Energy’s director of environmental policy and affairs. “We are required by statue to deliver to our customers least-cost electricity.”

He also said that, currently, renewable sources of energy such as solar and wind are not realistic in terms of supplying all North Carolina’s energy needs.

The discussion took place only two days after President Obama gave a speech in Florida where he stated that rising sea levels pose an imminent threat to the everglades and Florida’s economy. It also comes at a time when the state’s republican president candidates — Gov. Jeb Bush and Sen. Marco Rubio — are having to answer questions about their disbelief in human involvement in global warming.

The panel discussion was part of a seminar developed for Wake Forest’s first-ever group of graduate students in sustainability. Students have spent much of the year studying varying aspects of climate change, environmental protection and sustainable practices when it comes to energy production and waste.

In North Carolina, though, there is also a battle of ideas going on.

“You have to consider nuclear energy,” McIntire said. “Right now, renewable sources of energy do not provide an appreciable amount.”

This, though, led the panel into another problem: a lack of energy policy.

Despite President Obama pushing for such policies, McIntire claimed those policies are not actionable. Moderator Justin Catanoso, director of journalism, pushed back saying the president was demonstrating leadership on the issues of climate change policy even in the face of intense political opposition.

For corporate America, companies like Hanebrands — an international apparel company based in Winston-Salem — their energy and conservation choices reflect primarily what will help the bottom line, said Chris Fox, vice president of corporate and social responsibility division at Hanesbrands.

Other panelists agreed that corporations are often on their own as state regulators and legislators find themselves either stymied or unwilling to pass the necessary laws to reduce carbon emissions tied to climate change.

Natural gas took the panel into a discussion of fracking, the process extracting the natural gas from shale, something the Republican leadership in Raleigh is eager to promote. However, nationwide studies demonstrate that where fracking is prevalent in 16 states, especially Oklahoma, seismic activity such as earthquakes are increasing dramatically.

Grady McCallie, a water quality expert with the N.C. Conservation Network, argued that Gillespie was confusing the issue. You can’t have fracking without injecting the highly toxic wastewater back into the ground — whether it takes place in North Carolina or not, McCallie said.

Mostly, McCallie said, the state’s potential gas reserves from fracking are so small that they are not worth the risk of environmental damage.