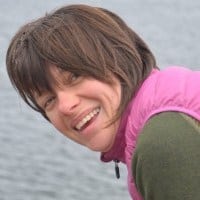 Since the Industrial Revolution, gigatons of carbon dioxide have been released into the atmosphere, which has resulted in the well-known greenhouse effect and long-term increases in global temperature. A lesser-known effect of climate change is ocean acidification. Because carbon dioxide tends toward equilibrium, excess carbon dioxide in the atmosphere will diffuse into the ocean, resulting in the biochemistry of the ocean becoming more acidic.

Ocean acidification has already been shown to have negative effects on calcifying species like corals, oysters, snails, crabs, and sea stars. Many microscopic species at the base of the food web are also affected. It has also been shown to change fish behavior: in more acidic seawater, juvenile fish have reduced ability to orient themselves, making them more susceptible to predators. Not every study, however, shows negative effects, and there are likely to be species that decline and those that thrive in an acidic ocean.

The rate of increase in acidification that the ocean is experiencing now is greater than it has been in the last 400,000 years, which leaves the question of whether marine species have the capacity to adapt to this new challenge. Current research in my lab is integrating field experiments, recent advances in genetics, and new statistical methodologies to better understand population responses to ocean acidification and climate change. Interdisciplinary approaches will be necessary to predict and mitigate the potentially devastating effects of ocean acidification.