The medieval world and climate change

The medieval world and climate change 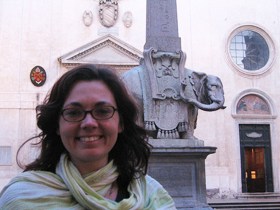 This past semester I had the chance to put the lessons I learned about sustainability in the curriculum from the Magnolias Project workshop into practice. I revised my HST 106, “Medieval World History c. 600-1600” course by adding a unit focusing on the Medieval Warming Period (c. 800-c.1250), looking at the global effects of a warming climate comparatively. While northern Europe in particular benefitted from the expanded land under cultivation and growing season, warm temperatures and droughts de-stabilized several other societies, including the Maya and Chaco Canyon cultures in the Americas and the Angkor culture in Cambodia. Few students came into the course knowing about this climactic shift in the past, and many were surprised to learn of the diversity of societal responses to climate change.

There were several ways that adding a focus on sustainability benefitted my longstanding pedagogical goals for the course. Firstly, the course aims to introduce students to the different types of evidence historians use and to give students the skills to analyze and assess that evidence. The evidence for medieval climate change is both direct and indirect,[1] leading to an interesting discussion not only about how scientists measure temperatures in the distant past, but to a consideration of disciplinary differences in the way scientists and historians treat evidence overall. Secondly, the course aims to demonstrate that history is not a fixed narrative of “what happened” but is composed of debates and arguments over questions of interpretation. While there is widespread consensus among historians that the medieval climate was warmer than subsequent centuries (but not warmer than the late 20th century), historians disagree sharply over what role a warming climate played in particular cases of societal collapse, and we engaged with several of those debates.

Finally, and somewhat unexpectedly, our discussion of medieval climate change was repeatedly delayed and postponed by the multiple cancelations and late starts caused by snow and ice this semester. This really brought home the point that climate change has unexpected and inconsistent outcomes, in the past as well as the present, and also highlighted the relevance of the course to the world students live in today.