Drink wine / Save the planet / Feed the hungry

Drink wine / Save the planet / Feed the hungry 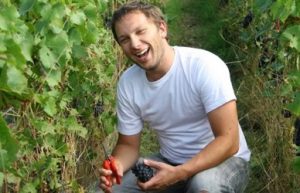 In the interest of sounding a little less unbearably flippant, I did change the official title of this February 2014 WFU conference to “Viticulture and the Environment,” but in my head and heart it remained “drink wine/ save the planet/ feed the hungry.”

The drinking wine part was expertly handled by Olivier Magny, a Parisian wine specialist who started his own wine tasting school after graduating from a top business school. He led a group of faculty, students, and one alumnus in a wine-tasting, following a talk by Professor Wayne Silver on “The Neurobiology of Wine Tasting (and Smelling).” So we drank a little wine. That was the easy part.

Magny’s work seems to have started from a sense of pleasure, but his own study of wine also led him to an awareness of the conditions in which grapes are grown and more specifically, soil health. He writes in his book Into Wine, “Studying how vineyards were farmed has helped me grasp that the importance of the soil actually goes far beyond wine, and that the implications of mistreating it are also much more far-reaching than we think.” Farming practices have the biggest impact on soil health, and there is much that deserves to be questioned in our current agribusiness practices. These issues are addressed in a rather international light in the documentary “Dirt,” which a small group of us watched together and then discussed. The politics behind agribusiness practices are daunting at best. In the spirit of a hummingbird analogy put forth by this film, both WFU EH&S Technician Justin Sizemore and Dr. Anne Marie Zimeri had ideas for addressing our individual carbon footprints.

I like to think of the following ideas as “Dr. Zimeri’s Eco Challenge.” Anne Marie Zimeri is an Assistant Professor in the Environmental Health Science Department at the University of Georgia. One of the courses that she teaches is a first year seminar in which she gives her students an assignment to collect and record data related to behavior changes they make to lower their environmental impact. She has the students select a pledge topic according to their own interest, related to one of the following areas: 1) Vegetarian / vegan 2) Transportation 3) Single use disposables 4) Composting / packaging 5) Water conservation 6) Electricity 7) Local /organic. For example, if students were electing to go vegetarian or vegan for a week, they would include before and after data relating both to how much meat they consume, and to the food miles, water use (in the production of meat vs. vegetables and fruits) and carbon footprint. More detailed information on this will be part of an upcoming publication by Dr. Zimeri. Like the hummingbird, we can only do what we can do in decreasing our impact, one rain barrel, solar water heater, backyard garden and bike ride at a time. So we learned a little about saving the planet.

It was the welcome presence of Shelley Sizemore, Assistant Director of Campus Life and Service that allowed me to add feeding the hungry to the list. Technically, we only fed our hungry selves that night, but I learned more about some ongoing campus and local efforts, including Campus Kitchen that distributes prepared but unserved food through local agencies including the Shalom Project, an outreach network started by Green Street United Methodist church that provides food, clothing, medical services and networking to the community. Wake Forest also has its own garden that both provides Campus Kitchen with fresh produce and also helps Wake Forest students (and I would add, faculty) better understand and influence the social, environmental, biological and political consequences of food production and consumption. So we could be part of feeding the hungry, if we’re not already.

I like the three-fold nature of my not-really-the-title-except-yes-it-is, because it reminds me of just how interconnected everything is. Even starting from the position of a possible urban sophisticate enjoying his or her own glass of wine can logically lead to soil health, then to the importance of environmental stewardship, then to food production and distribution. So, next time you swirl and sip, think about where the contents of your glass were originally grown.