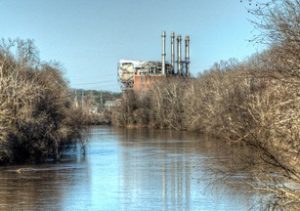 On February 2nd, 2014, the third largest coal ash spill in the history of the United States occurred right here in our back yard. The spill at the Dan River Steam Plant released tens of millions of gallons of coal ash into its namesake river. The Dan River runs from the plant in Eden, NC northeast across the Virginia state line before emptying into Kerr Lake 70 miles away. Ash from the spill has been found lining the river all the way to the lake, carrying with it a toxic payload of heavy metals and other harmful materials. The spill and the subsequent criminal investigation into its causes have garnered national media attention, including the New York Times and MSNBC. In the meantime, CEES researchers have been working to better understand the scope of the disaster and what its impacts on our environment and our community will be.

Dennis Lemly, WFU research associate professor of biology and research fish biologist with the US Forest Service, is an expert on coal ash, and has been watching the spill since day one. With over 30 years of experience investigating the impacts of chronic coal ash pollution, Lemly knows all too well what this massive spill means for the Dan. The heavy metals and other contaminants in coal ash, like selenium, are pervasive in the ecosystem, as they accumulate in the organisms that live there and interfer with their development and reproduction. He expects to see the chronic exposure to toxins like selenium degrade wildlife in and around the river, including two federally-listed endangered species, over the coming years. In addition to the severe environmental damages resulting from the spill, Lemly has also analyzed the economic impacts of coal ash. He estimates that the environmental impacts on the river will cost at least $70 million, with the ultimate costs having the potential of being much, much higher. He attributes this sum to a number of factors including the costs assessed for lost wildlife, loss of fishing and recreation resources, and decreased property values along the river.

With the dangers of coal ash clear and the magnitude of the spill still in question, the CEES-funded Small Unmanned Aerial Systems Lab set out to better characterize the amount of ash and contaminated water that poured into the river. On February 7th the team, led by graduate student Max Messinger, CEES director Miles Silman, and CEES affiliate Marcus Wright, used one of their fixed-wing unmanned aircraft to overfly the ruptured ash pond and obtain highly detailed aerial imagery of the pond in order to provide an independent estimate of the size of the spill. The team developed an estimate that places the size of the spill at up to 35 million gallons of ash and contaminated water. This number, which falls in line with previous Duke Energy estimates, provided independent confirmation of the spill’s magnitude to Duke Energy as well as the public and regulatory agencies.

In an environmental disaster where we are all stakeholders who have a natural resource under threat, CEES researchers are providing information on what is happening and what it means to us and our environment. With 30 other coal ash ponds in North Carolina, this information is invaluable not only in this case but in understanding the danger that lurks beside some of our most important bodies of water. Promises of severe long-term impacts and little hope for meaningful remediation of the Dan River demonstrate the need for more stringent regulation of coal ash to prevent disasters like this from continuing to happen.