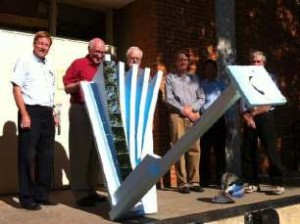 What do 300 suns, boat hull construction, Cool Energy engines, water splitting, GaAs nanowires and piedmont North Carolina have in common?  They are pieces of a green energy puzzle that students and faculty of four Piedmont Triad universities are trying to assemble.  Teams from Wake Forest University, Winston-Salem State University, UNC Greensboro, and North Carolina A & T State University have joined efforts to try out some approaches to renewable electric generation that are less ordinary than flat silicon photovoltaics.  The group wants to see if they can build concentrator mirrors more cheaply than equivalent areas of flat solar panels, develop novel power conversion units at the focus that may get at the problem of extending power to nights and cloudy days, and reclaim energy of waste heat that would otherwise be dumped.  Waste heat recovery from smoke stacks and exhausts as well the business end of solar concentrators is where we start this story.

Stirling engines are fascinating devices that turn a crankshaft with nothing going in or out except heat energy conducted through metal plates.  They can literally run on the heat of sunlight, or on hot exhaust discharged from another device that would be wasted if not reclaimed.  The photos below show members of the Four Universities Solar Consortium from WFU, WSSU, and UNCG inspecting a novel low-temperature Stirling engine and the solar collector that powers it while under extended reliability testing by its developer, Cool Energy Inc., in Boulder, CO.

The triad university consortium is looking for smokestacks in the area to link up to Cool Energy Stirling engines that ideally could be manufactured in North Carolina under license.  The conversation has started around university steam plants and inquiries are out to some industrial utility waste heat producers and manufacturing engineers.

Concentrating sunlight inexpensively is something that Wyndham Wilkinson, Prof. Lei Zhang, and students at WSSU want to base on a technology of boat construction that is familiar to Wilkinson from his prior experience at AMF Hatteras Yachts – fiberglass and foam core/composite molding. The group has been assisted by 3A Composites Inc. of Colfax, NC in vacuum infusion and molding of core composite structures, and 3M Corp. in application of reflective films.  The photos below show a mock-up of  a mirror segment at WFU that is now being produced as a plug mold by Wilkinson, Prof. Lei Zhang, and students in WSSU facilities in the former RJ Reynolds Whittaker Park labs in Winston-Salem.  It is designed for 300 suns concentration.

A well-known issue with using electricity from direct solar conversion has to do with night and clouds, as well as the timing of peak demand from consumers.  Energy storage is an important key to using renewable sources of electricity effectively.  Wake Forest University has an active research effort in advanced battery materials partly supported by CEES.  WFU also has ongoing research, supported by CEES as well as the Triad Universities Solar Consortium, on water splitting for energy storage, also known as solar fuels.   Sunlight falling on a suitable photocatalyst immersed in water can be made to split water molecules into hydrogen and oxygen, which can be stored and converted to electricity on demand in a fuel cell or heat engine.  North Carolina is already a strong player in this arena, with UNC-Chapel Hill, NC State, and Duke operating a DOE Energy Frontiers Research Center on solar fuels.  At Wake Forest, CEES postdoctoral fellow Dr. Keerthi Senevirathne, along with student Shiba Adhikari and Professors Abdessadek Lachgar and Richard Williams (members of CEES and the Triad Solar Consortium) are investigating specific photocatalysts including titanium dioxide/Pt, zinc gallium oxynitride,  indium tantalate, and bismuth tantalate.   The work will include looking at possible advantages of conducting photocatalytic water splitting in concentrated sunlight at high temperature, along with waste heat recovery strategies pursued in the rest of the Consortium.

Prof. Shanthi Iyer and her students at NC A&T State University are investigating gallium arsenide (GaAs) nanowire structures as the basis for new high efficiency solar cells for operation in concentrated light, complementing their ongoing work on this material as a photodetector.  It is hoped that GaAs nanowires may develop ultimately into a cheaper route to high efficiency solar conversion than conventional triple junction cells based on multiple layers of alloys of GaAs.  To be sure to cover multiple bases, the group is also experimenting with commercial InGaP/InGaAs/Ge triple junction cells within the Four Universities Solar Consortium project.