Microlending for Sustainable Development in Nepal

Microlending for Sustainable Development in Nepal 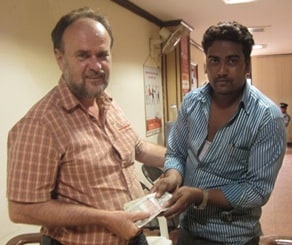 Donation of cash to a member of the Drinking Water Committee in Maigum. These funds are to be used for the next stage of the project, the purchase and installation of a large (500 liter) tank that will collect water.

In 2012, I was awarded $1400 from CEES for small-scale, community-focused development efforts in Nepal.  The target population is the poorest and most marginalized group in Nepal, known as Dalits.  They are spread throughout most of Nepal, in small, semi-autonomous communities, lacking in resources and leadership.  Our giving focused on two efforts in two different communities.

One was in the small hamlet of Maigum, near the administrative town of Besisahar in Lamjung District, where I have been collaborating with locals to install an effective system for the delivery of clean drinking water.  The project has evolved over time, as the community of Maigum first attempted to deliver water to only three outdoor taps to be shared among its 22 houses.  This plan was found to be infeasible and unsustainable because of the unequal distribution of water.  After an informal community discussion forum this summer, we agreed that we needed to be more ambitious.  They set the goal for universal coverage and to have the technical advice and assistance of the Department for Drinking Water in Besisahar.  There is now a three-stage plan in place: 1) to set a water tank in place, 2) to create a system to funnel water to the tank, and 3) to deliver water to all 22 households.  The donation I made to the project ($850) was sufficient to purchase the water tank and the fittings necessary for it and to have some funds left over.  These are to be managed by the Drinking Water Committee and supplemented by modest donations from each household, in order to instill a greater sense of ownership.  The total cost of the project will exceed $1800 eventually, and we are in the process of looking for other sources of funding.

The other project is in nearby Sundar Bazaar.  It is focused on assisting poor people with creating a sustainable foundation for providing a livelihood for themselves.  This effort began last year by allocating funds to be used to assist individuals or families with startup agricultural or livestock enterprises.  The pilot project was promising.  The management committee provided Rs. 5000 (approx. $50 US) to a young widow, Sharmila Pariyar, to purchase 60 chickens that she would raise to later sell on the market.  The project was a booming success in several ways.  First, she successfully reared 57 chickens, with only 3 dying before she could sell them.  These she sold after 6 months as that was when the funds for feed also ran out.  But when she did sell them, she was able to repay the loan in full and make a modest profit.  The flock did not increase because they were of the infertile, bikashi (“developed”) variety.  After exploring her situation this past summer, the committee and I decided that she would be lent Rs 10,000 for the coming year, with several changes that are meant to foster a greater chance of success.  These changes include utilizing land that I own in Sundar Bazaar to put up fencing and a coop in which to keep the chickens and to build a small house in which Sharmila can live.