Land Use, Prosperity, and the Future of Wild Places: Bruce Babbitt speaks on the changing American landscape

Land Use, Prosperity, and the Future of Wild Places: Bruce Babbitt speaks on the changing American landscape 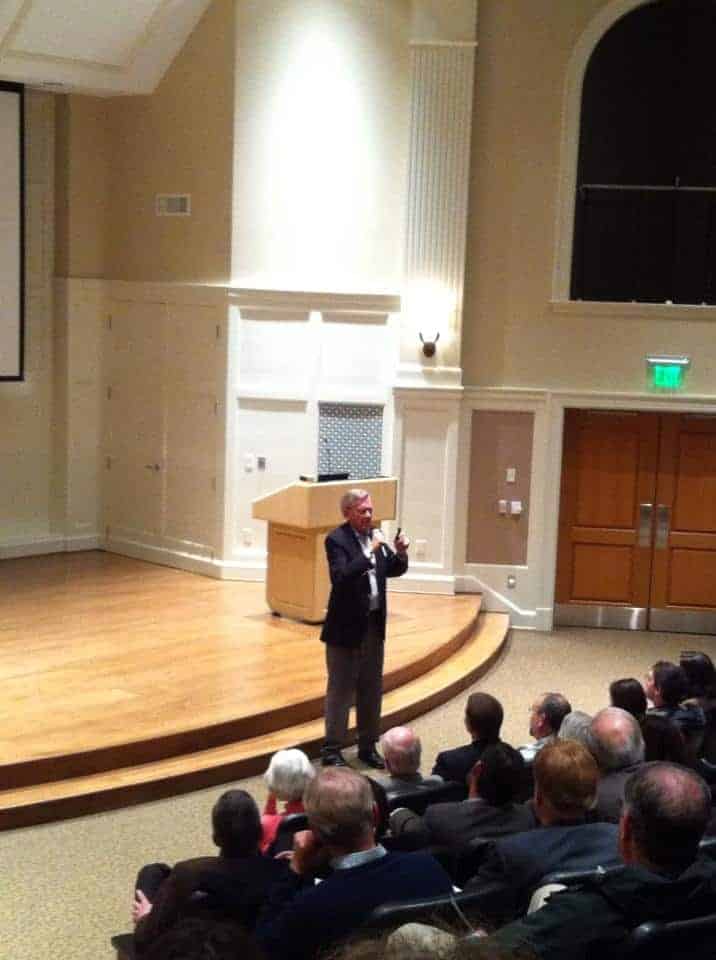 On February 7th, CEES welcomed former Secretary of the Interior and Arizona governor Bruce Babbitt to discuss land use and the future of natural landscapes in the U.S.

Mr. Babbitt has had a prolific political career, beginning in Arizona, where he served as the state’s attorney general for four years before becoming governor. During his eight-year tenure, the Arizona State Park system grew from one of the smallest to one of the most impressive in the country, boasting one of the highest percentages of public land. Mr. Babbitt was nominated by President Clinton in 1993 to serve as Secretary of the Interior.  While in this position, he focused not only on environmental protection, but also on restoration.  Babbitt helped to shape policies for old growth forests in the Pacific Northwest, preserved desert landscapes in California, sought to protect headwaters and their surrounding forests, and began the work of restoring the Everglades in Florida.  Babbitt also revitalized the Endangered Species Act,  and his overall efforts led to the protection of more than 30 million acres.  Since leaving his post, his focus has shifted to protecting the Amazon Basin of Brazil and Peru, one of the last, truly wild places on earth.

Babbitt’s visit to Wake Forest University aimed to stir up imagination and political will for the changing nature of the landscape, specifically the separation of the natural world and the built world, and what can be done to responsibly manage these changes.

“Join with me briefly in imagining,” Babbitt began, “what this natural landscape may look like a hundred years from now.  We do this by projecting forward the ways we manage and mismanage the land.” He noted three significant issues that are irrevocably in motion that will have a tremendous impact in the future on the ways in which we live on the land.

First, population growth in the U.S. is projected to increase by at least 100 million people by the end of this century. Not only is population a significant factor, but where that population locates itself will have an effect on life in the natural world. “Americans are increasingly freed from geographical constraints,” Babbitt remarked, and moving more and more towards the urban centers, with approximately two-thirds of people living in densely populated coastal cities.

Secondly, the reality of climate change and its effect on our waterways, rivers, and oceans will have wide-reaching impacts. Sea levels are predicted to rise about three feet, which will necessitate a retreat back from the coasts. “In North Carolina, this means we may be one of the last few generations that will know the Outer Banks,” Babbitt observed.

The Central Valley in California is another area that will change tremendously in the wake of rising temperatures. Here, up to half of the produce in the United States is grown, nurtured by the slowly melting snows that gather on the mountains that surround it. With the change in climate these snows will morph into rains, altering the entire balance of the ecosystem.

Finally, in the next one hundred years we will see radical changes in the delicate equilibriums of entire ecosystems. “All these ecosystems are going to be in motion, looking for a new equilibrium,” Babbitt suggested. It will alter pollination, migratory patterns, and the geographic locales where animals make their homes. He noted how Miles Silman, Director of CEES, and Professor of Biology, has been able to track this phenomenon in the Amazon Basin as the trees in the forest seek higher and higher ground in the Andes.

Despite these severe predictions, Babbitt wanted to avoid being a prophet of doom, wishing instead to bring some hope for change. “I am always a politician about these things, I want to know what we’re going to do about it!” Indeed, Babbitt concluded with many options to spark the political imagination.

He suggested the need for a national-scale step back from the coastlines and a return to open spaces. In urban areas, he proposed intentional efforts for federal land use planning, including the protection of natural areas and establishing city boundaries in order to contain urban sprawl. This has been done in places like London, Seoul, Portland and New York City.

Babbitt also predicted a shift in momentum towards these kinds of considerations, especially in the Federal Government. While there is not a big push for them now, soon the needs for infrastructure rebuilding, land use, and climate change will demand attention from national leaders. When that time comes, Babbitt implored, it is time for the public to demand these kinds of intentional considerations before any new projects are begun by the government.

“We don’t have to have a perfect agreement with everyone in the world on this issue,” Babbitt concluded, “but whenever Americans have stepped forward, the world has followed.” It is with this hope Babbitt is working to turn the momentum on climate change and land use towards a more intentional understanding of the shifting landscapes of the natural world.