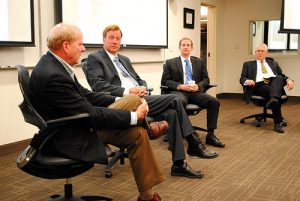 Sustainability can be effective when solid science meets thoughtful business strategy, That’s why the energy industry is keeping a close eye on the Apple Fuel Cell Project in North Carolina

“As demand grows, why not push ourselves to as much as reasonably possible; supplement the existing infrastructure, and replace retiring infrastructure with facilities that run on solar, wind, and biomass,” said, Michael Youth, Counsel and Regulatory Advisor for the North Carolina Sustainable Energy Association (NCSEA).

The fuel cell project is the largest in the country not built by an electric utility company. It is located at Apple’s data center in Maiden, North Carolina.  The data center will also host a planned 20-megawatt solar farm, the biggest ever for the state.

Williams and Rastler both provided background on the technology for the audience, which was largely made up of people in the business sector.

“It’s really an exciting technology. There are a lot of opportunities to get involved in the value chain,” said Rastler.

Fuel cells generate electricity through an electro-chemical process that gives out power as long as there is a source of hydrogen.   They are highly efficient, reliable and produce a lot of power. That’s essential for a company like Apple that needs high voltage to operate.

Youth suspects Apple’s decision to put the fuel cell project at its data center was fueled by corporate social responsibility rather than economics, and he sees it as positive for the state.

“NCSEA sees Apple’s concept as moving our power system in the right direction,” said Youth. “There are practical questions about how to marry Apple’s concept with our state’s renewable energy and energy efficiency portfolio standards.”

Those standards are collectively known as the Reps Law. The law requires electric service providers to meet a portion of their overall demand through renewables based generation and energy efficiency measures.  The Reps Law also comes with compliance credits, which Youth says is moving North Carolina’s power system in a more sustainable direction.

Apple has said it will make landfill gas the farm’s primary fuel.  Off-site bio gas will be injected into the natural gas pipelines for use at the Apple facility.  Among the issues that concerns NCSEA, is making sure that the off-site gas isn’t earning Reps credits in more than one place.

“We want to make sure there isn’t double counting going on,” said Youth.  But with due diligence he says, North Carolina can use the Apple opportunity to create an environment where other companies will follow the computer giant’s lead, furthering the state’s stake in the energy industry.

Fogel warns problems with regulatory issues can be an obstacle to this potential for energy growth.

“If Apple runs into regulatory issues, these outcomes would be terrible for everyone who wants to try new ways of delivering energy. Our state and local regulators need to step up to the plate on this one,” he said.

Still, Fogel says Apple’s project can show other companies that North Carolina has a lot to offer.

“That Apple would choose us is both a vote of confidence and a demonstration that we can offer affordable places to do business,” he said. “Apple’s experimentation with this technology will teach others about alternative solutions to energy challenges.”