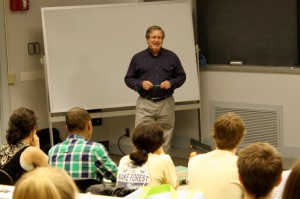 A standing-room-only crowd packed DeTamble Auditorium on March 20 to view the documentary film Green Fire: Aldo Leopold and a Land Ethic for our Time, about the life and legacy of conservationist Aldo Leopold.  Curt Meine, Leopold’s biographer, was on site for the screening and for a brief Q&A after the film.

Aldo Leopold is considered one of the most important conservationists of the 20th century, and is responsible for helping to develop the national wilderness system.  Leopold also dedicated much of his career to in the study of wildlife management and the science of ecological restoration, issues that still resonate today.

The documentary chronicled Leopold’s life from his birth in 1887 to his death in 1948.  As a young man interested in the outdoors, Leopold joined the newly established Forest Service in 1909 after graduating from the Yale Forest School, and began his career in New Mexico.  The movie told of Leopold’s groundbreaking work in forestry, culminating in his development of a management plan for the Gila National Forest as a wilderness area.  Gila received official status in in 1924, making it the first dedicated wilderness area in the US.

Leopold moved to Wisconsin, and continued his conservation and land restoration work at the University of Wisconsin and on his own family farm.  He began to write extensively, and his articles were published widely in journals.  His manuscript for his most famous work, a book titled A Sand County Almanac, was accepted for publication one week before his death in 1948.

After the film, Curt Meine spoke with the audience about the importance of Leopold’s life, and how his legacy is rediscovered by each new generation of people interested in conservation.  He stated that young people were the key to reinventing what environmentalism should mean today.  He encouraged everyone in attendance to think about and develop their own land ethic, and to consider Leopold’s work as only the beginning of great things to come.

The screening was made possible through a collaboration between the Department of History and the Center for Energy, Environment and Sustainability (CEES).