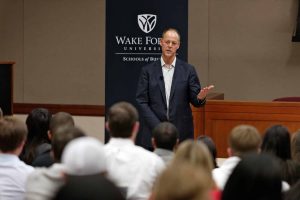 In business, core values are at the heart of sustainability.  For Walter Robb, the Co-Chief Executive Officer of Whole Foods, those values are what drive every decision he makes.

“There’s no reason a business can’t strive for the highest good in life, just like any individual does — the good, the true, the beautiful–any of the things like that. There’s no reason a business can’t do just the same thing,” said Robb speaking Tuesday afternoon to a packed auditorium at Wake Forest University.   Robb’s talk, “Capitalism with a Conscience”, was presented by the BB&T Center for the Study of Capitalism’s Broyhill Speakers Series.  The Center for Energy, Environment and Sustainability (CEES) co-sponsored the event.

“They are stakes in the ground. They are a point of view. There are a lot that changes in business everyday, but there are some things which should not change [such as] what you fundamentally believe,” he said. “What do you believe, and when you go to make decisions, what are you going to draw on to make those decisions?”

For Robb, those values are the core of Whole Foods’ corporate social responsibility and what differentiates its business model from others in the marketplace.

“Many companies have values, but they don’t really connect with what they are trying to do,” he said.

Whole Foods is connecting values with profits and satisfied employees.  The company brought in $9 billion in sales in FY 2010 and their stock price lists around $74. This year they celebrated their 15th year on Fortune magazine’s “100 Best Companies to Work For” list.

“We don’t operate the business to make money. Yes, we do make money.  We operate this business to create change in the world, and to create a workplace based on love and respect. That’s what we are trying to accomplish. That is why we get up in the morning everyday.” he said.

Robb believes business has a social responsibility.  Whole Foods prides its business on transparency and accountability when it comes to its food products and its suppliers.  White Oak Pastures, for example, supplies Whole Foods with grass-fed beef. The fifth generation family farm has built a solid relationship with the grocery store chain. Its owner, Will Harris, told the audience by video that his banker and his lawyer warned him not to pull all his eggs in one basket with Whole Foods. Harris told the Wake crowd that doing so was fine with him because, “it was a pretty nice basket.”

Whole Foods is committed to that community relationship. The organization provides loans ranging up to $100,000 to small, local producers.  In Winston-Salem, it recently hosted a flash mob featuring Annie cast members from the Twin City Stage.  This month it broke ground on its new store in inner-city Detroit. To show its commitment to the struggling community, Whole Foods signed a 30-year lease.

For Robb, sustainability is rooted in the organization’s values and by following its core principles.