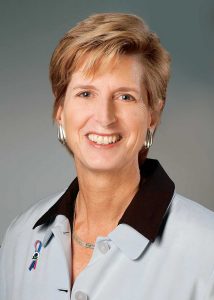 Whitman is the President of The Whitman Strategy Group (WSG), a consulting firm that specializes in energy and environmental issues. WSG offers a comprehensive set of solutions to problems facing businesses, organizations, and governments; they have been at the forefront of helping leading companies find innovative solutions to environmental challenges.

Governor Whitman served in the cabinet of President George W. Bush as Administrator of the Environmental Protection Agency from January of 2001 until June of 2003. She was the 50th Governor of the State of New Jersey, serving as its first woman governor from 1994 until 2001.

As Governor, Christie Whitman earned praise from both Republicans and Democrats for her commitment to preserve a record amount of New Jersey land as permanent green space. She was also recognized by the Natural Resources Defense Council as having instituted the most comprehensive beach monitoring system in the nation. As EPA Administrator, she promoted common-sense environmental improvements such as watershed-based water protection policies. She championed regulations requiring non-road diesel engines to reduce sulfur emissions by more than 95 percent. Under her tenure, the Agency established the first federal program to promote redevelopment and reuse of “brownfields”, that is, previously contaminated industrial sites.

Governor Whitman serves on a number of non-profit organizations including the Board of Trustees’ Executive Committee of the Eisenhower Fellowships and the Board of Directors of the Council on Foreign Relations. She co-chairs Clean and Safe Energy (CASE) with Dr. Patrick Moore and is a member of the board of directors of the American Security Project. She is Co-Chair of the Aspen Health Stewardship Project, and a member of the advisory board of Reform New Jersey Now. She was also the Co-Chair for the Council on Foreign Relations’ Task Force, More Than Humanitarianism: A Strategic U.S. Approach Toward Africa.